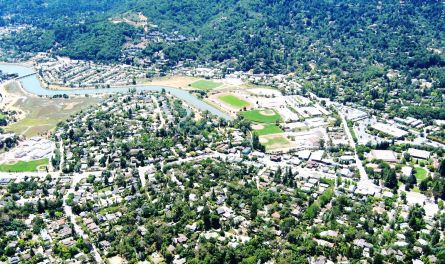 The flats of Kentfield, with the College of Marin lower right. 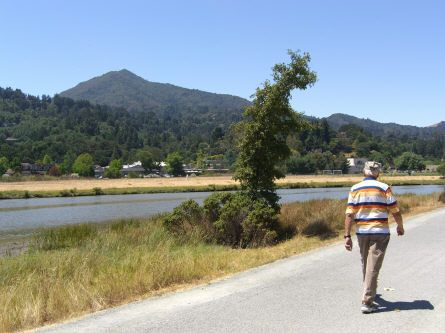 Kentfield is located near the base of Mt Tam, between Larkspur and Ross. 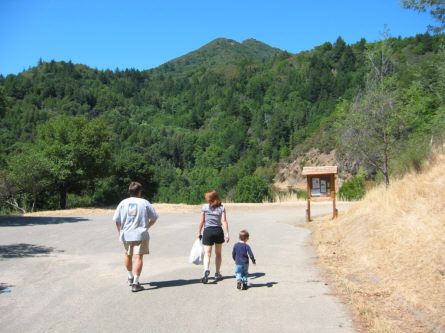 The Crown Road Trail is just above Kent Woodlands, another fine place to hike 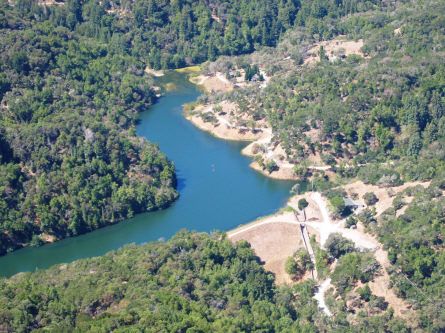 Phoenix Lake is just outside of town and is one of many great places to hike. 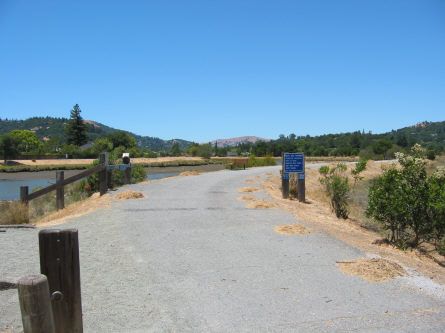 A great bike path that runs along Corte Madera creek, from Mt Tam to the bay. 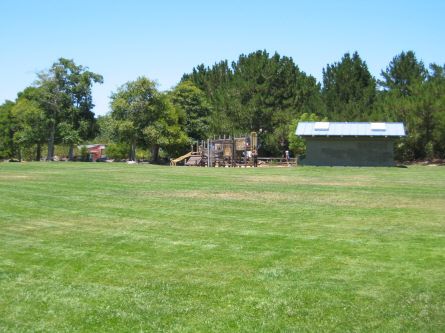 Creekside Park is across from Marin General Hospital and features this huge lawn and... 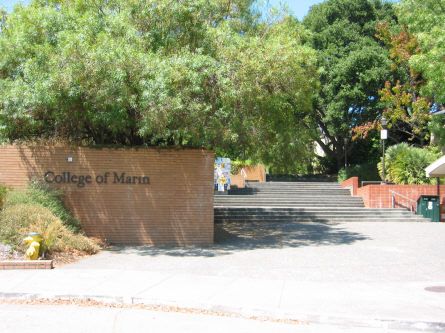 Kentfield hosts a number of excellent schools, including the College of Marin, and... 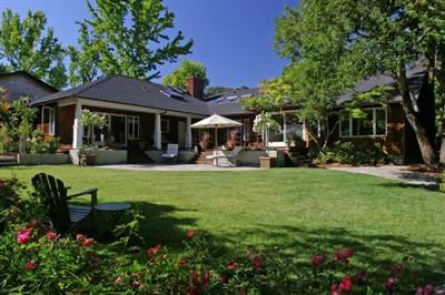 Kentfield homes are some of the finest (read most expensive) in Marin. 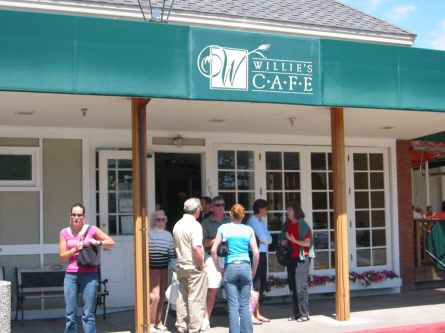 Willie's Cafe is right next door and is a fun, casual spot to meet and eat. 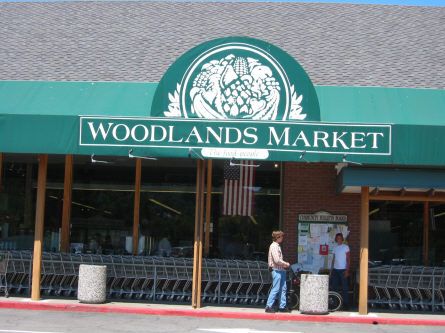 Woodlands Market is the unofficial center of Kentfield. One of the best markets in Marin.
Prev
Next

Kentfield is located at the lower portion of Mt. Tamalpais, situated between two mountain ranges and bordered by Ross and Larkspur. This area provides top quality hiking and biking trails and spectacular views that only a valley city can provide. Kentfield offers a mild climate, even when it is foggy in nearby areas, Kentfield CA will generally be sunny and a bit warmer. Kentfield is an upper middle-class to wealthy community that offers the opportunity to enjoy nature and community togetherness. The homes have a country setting, nestled among pine, redwood, and manzanita with large lots, houses set back from the road, and low profile roofs. Many of the residences are large estate-size homes. Kent Woodlands is a sought-after prestigious neighborhood of ranch, Mediterranean and colonial estates with an active property owners association.

Kentfield is named after Albert Kent, a wealthy Chicago meat packer who, along with his wife Adaline, settled in the area in 1872. Adaline donated 23 acres of land for a community recreation center that later became the site for the College of Marin, which is part of the California Community College system. The College has been providing exceptional educational opportunities since 1926. Each semester about 8,000 students are enrolled in over 1,100 credit classes and nearly 6,000 students take advantage of the College’s many outstanding community education classes. In keeping with family tradition, Albert and Adaline’s son William, who became a U.S. congressman and a conservationist, donated Muir Woods as a national park. Thought of as a separate town, Kentfield is actually an unincorporated area of Larkspur, governed by the County Board of Supervisors, and shares utilities and many public services with the Twin Cities of Corte Madera and Larkspur.

Kentfield does have its own school district and is ranked in the 99th percentile, the highest in the state. The Kentfield Schools Foundation is a group of parents and community members who volunteer their time and efforts for fundraising activities to support basic programs and fund additional programs that foster excellence in education. With its central location, Kentfield residents have access to a full range of nearby shopping and recreational opportunities. The four major shopping areas (Bon Air Center, Village at Corte Madera, Corte Madera Town Center and Larkspur Landing) are minutes away and one can find all types of stores, from nationally known chains to locally owned boutiques. Kentfield is close to Mt. Tamalpais, with miles of hiking and biking trails, and also is quick access to the many parks located throughout Marin County.

They certainly sound like cities – There is a Kentfield School District, a Kentfield Post Office (zip code 94904), a Kentfield Fire Station, and Kent Woodlands Property Owners Association. Yet neither Kentfield, nor its sister community Kent Woodlands, is actually a city as they’re unincorporated county areas. The Marin County Board of Supervisors is the governing body.

Combined, the two communities are home to over 8,100 residents, placing them midway between Sausalito (pop. 7,300) and Tiburon (pop. 8,900) on Marin’s population rankings. Kentfield, with 6,400 of those souls, lies on the eastern and mostly level side of Sir Francis Drake Blvd between Greenbrae and Ross. Kent Woodlands (pop. 1,700) occupies that lush, rolling slope of Mount Tamalpais behind College of Marin. Both communities derive their names from the family influential Marin pioneer William Kent (1864-1928), a three-term Republican congressman and friend of John Muir who played a leading role in creating both Muir Woods National Monument and Mount Tamalpais State Park.

If Kent Woodlands and Kentfield had a social center, it would probably be Woodlands Market, â€œItâ€™s like our town hall,â€ says 30-year Kent Woodlands resident. Woodlands Market, owned by Don Santa also hosts a community barbeque with all funds raised benefiting the Kentfield School District. Which, according to a majority of residents, is only fitting. â€œKentfield Schools are fabulous,” says Dr. Bruce Stamper, a fifth generation San Francisco Optometrist and longtime Kentfield resident. He and his wifeâ€™s two girls attended both Bacich Elementary, Kent Middle and Redwood High School, not a part of Kentfield School District. â€œOne daughter graduated from Boston University and the other UCLA,” sayâ€™s Dr. Stamper.

Earlier this year, a parcel tax that will progress annually from $775 to $1,200 per household per year over the next 10 years, was approved by an impressive 71 percent of those voting (the Kentfield School District also includes Greenbrae).

Both Bacich Elementary and Kent Middle Schools have been named â€œCalifornia Distinguished Schools.â€ both scored in the top three percent in the recent statewide academic testing, and while Bacich boasts a 20-to-one ratio. Regarding high schools, students living in Kentfield and Kent Woodlands have several nearby to choose from. The public high school is Redwood (also a California Distinguished School) in Larkspur; close-by private high schools include Branson, Marin Catholic and Marin Academy.

Excellent schools are definitely a reason for location in either Kentfield or Kent Woodlands, just ask any Marin County Realtor. Surprisingly, the relatively low price of $469,000 will get you into the area. Thatâ€™s of course for a one bedroom, one bath condo. Though there are few Kentfield homes available under $2 million, the generally accepted price for a single-family home in either Kentfield or Kent Woodlands in more like $3.5 million and up.

So who cares if Kentfield and Kent Woodlands aren’t Marin cities? They seem to be doing extremely well as plain and simple unincorporated areas!â 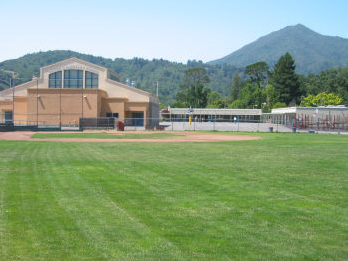