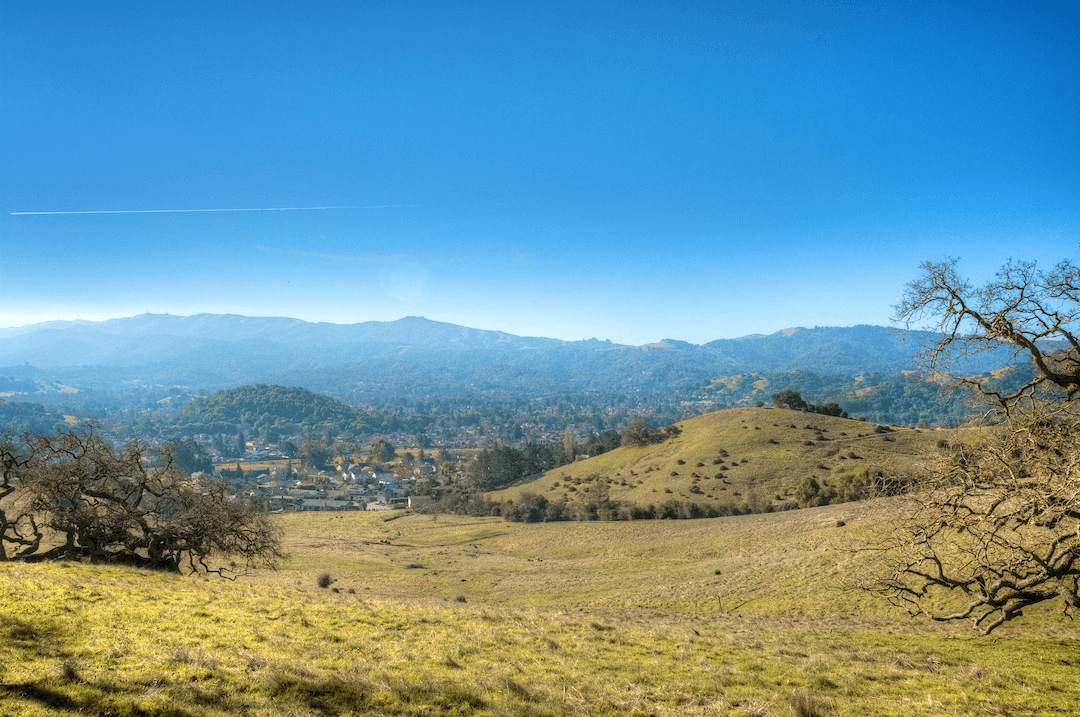 Marin County has great weather. To most who live here, it’s one of the natural attributes that help make it one of the best places to live in the world. Many say it’s as close to perfect as you can get and still enjoy all four seasons. I grew up around here and tend to agree, though I’m probably not the best one to ask as I’m not exactly a fan of cold weather.

We are also a county of extreme microclimates where the weather might vary by 15º between two towns only a few miles apart. This is due to a number of factors and is very important to keep in mind during the home buying process. For one, the summer fog can peel in from the ocean in the summer, cooling things down in southern Marin, but keeping things hotter in the central and northern parts of the county. There are also parts of the county that suffer from prevailing winds, while others nearby do not and some towns that get twice the rainfall of others nearby.

Like any major purchase, it’s wise to do your research in advance. In this case, that may mean browsing through the following information here, but also inquiring about specific weather patterns in any areas or neighborhoods that appeal to you. An experienced agent will be able to help you accordingly.

The following information will hopefully be informative if you’re not familiar with bay or coastal living, but if you have any specific questions, don’t hesitate to call or email me. I am very familiar with the weather patterns throughout Marin and most of Northern California. 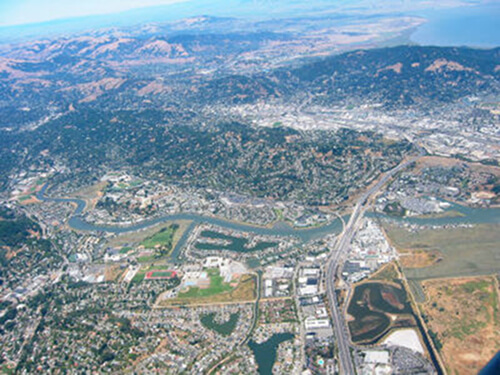 A typical Spring, Summer or Fall day in Marin with plenty of sunshine and clear skies. Note the lack of smog in the air!

Spring, Summer and Fall. Marin is a county of four mild, distinct seasons, but is mainly dominated by seven warm weather months of May thru November, not a cold long winter. Marin features a long summer with a short spring and fall acting as transitions around our mild, short winters. Spring time starts in early May with average daytime temperatures in the 70’s, increasing to the mid or high 80’s by summer. Our warmest months are generally June thru October where it’s not uncommon to have warm spells for weeks at a time, right up until early November. Truly, we have a great, consistent Indian Summer. There is no smog and air conditioning in homes is rare, though not unheard of, especially in the more expensive homes.

Marin county is known for its outdoor activities, most of which take place between April and December. These include, hiking, biking, skating, sailing on the bay, surfing, kayaking, fishing, camping, sightseeing or even bird watching. For things to do while it’s warm, visit the following pages of my site for great outdoor activities like Hiking and Biking or Parks and Pets. Again, don’t hesitate to call me with any questions about summer activities or things to do in the county. As always, I’m here to help. 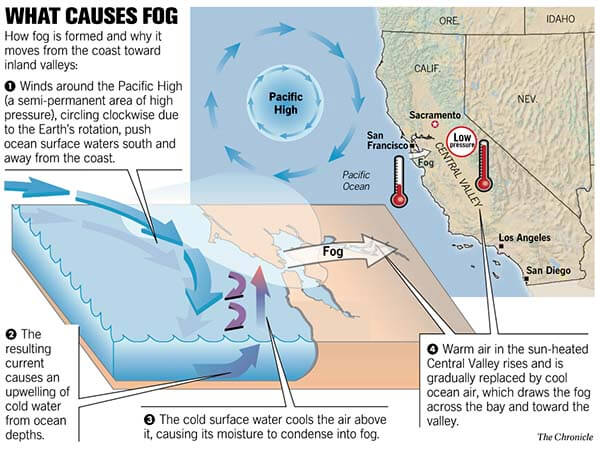 Microclimates and Fog. Many years ago, I had the pleasure of working with a new buyer who was transferred from Minnesota out to run Fireman’s Fund in Novato, one of the largest employers in Marin. When I picked him up at his hotel, I already knew his price range and the type of home he was looking for, but I didn’t know the answer to another important question for home buyers. So I asked him, what type of weather do you like? He was stunned. Like many people, he assumed the weather was the same throughout our small county of only 250,000 residents, varying only with the time of year. Nothing is farther from the truth, so I explained to him the varying microclimates of Marin.

If you’re from the Bay Area or any coastal region of California, you can skip this part. You know all about fog. Marin County isn’t known for its fog per se, but it does impact the south end of the County, particularly Sausalito, as well as southern Marin in general (Mill Valley, Tiburon, Belvedere). There’s a diagram here of what causes the fog, but just know that from a practical standpoint, you will spend a lot more time outdoors if you live in central or northern Marin. There are a lot of scientific factors like the marine layer which brings fog in off the ocean, or inland high pressure systems which burn it off and bring in the warmth. Now, one of my friends is the weatherman for ABC Channel 7 here and he has all sorts of data, maps and graphs to explain how these work, but that’s too confusing. I grew up here and, in a nutshell, here is my own simple take on the temperature variations in Marin: Basically, temperatures get warmer about 1º, per mile, as you head north on 101 from Sausalito to Novato.

That’s the simple version. On any given day, especially spring, summer or fall, drive the 10 miles from Sausalito to San Rafael and there will be a temperature difference of around 15º. The reason? You’re heading gradually farther away from the bay and the coast as you head north. That marine layer I talked about earlier keeps the weather cooler anytime you’re near the water. Granted, there are plenty of variations to this general rule of mine. There are days when it’s just plain hot or just plain cold throughout the county. This is just a rule of thumb to help you if you’re not familiar with Marin. There are also pockets throughout Marin where the weather changes over the span of a few blocks. Sausalito has a Banana Belt where it’s warmer than, say, Hurricane Gulch in the same town. Mill Valley has a foggy side and a warm side. San Anselmo, San Rafael and Novato area all prone to wind in some areas. The main thing to remember is, weather varies over a short distance in Marin. It’s important to do your research before you find out you bought a home in any area, unless you live in a Biosphere and don’t care about the temperature outside. If you’re relocating here, you can either call or email me with any questions. I am very weather sensitive who prefers warmth over cold, so I’ve done my best to learn about the weather in the county. I can help you find the area that works best for you. 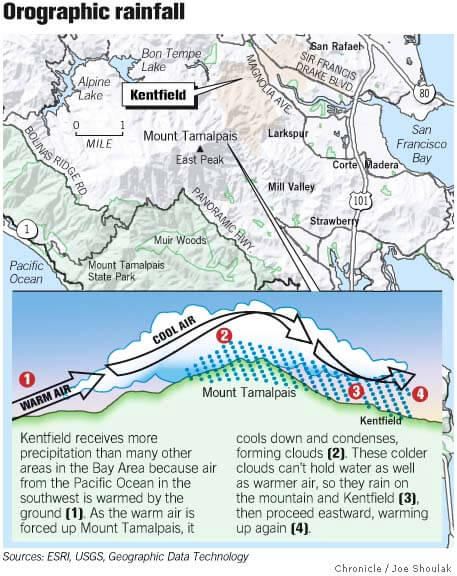 Winter. As I mentioned, winter is a short season, beginning sometime after January 1st and ending sometime around the end of March. Winter officially starts whenever the rain decides to fall over Marin and snow blankets the Sierra Mountains, though this can be hit or miss. An early winter can mean rain in late November with some ski resorts open for Thanksgiving, yet it's also not uncommon to play touch football on a warm Christmas day. The rainiest months though are easily January thru March where we get an average of 40 inches of rain. Kentfield, which is at the base of Mt. Tam, averages 47 inches, due to rising of rain clouds over the mountain. The colder, higher air causes the clouds to release the rain. Temperatures rarely get below 50º during the day in the winter and it hardly ever drops below freezing at night.

The best thing about winter in Marin is our close proximity to skiing up at Lake Tahoe. I'm particular to Squaw Valley and Heavenly, having grown up skiing there as a kid. Whichever you choose, the lake is the place to be during the winter (or summer). The drive up is less than four hours, unless there is a storm, which can mean over six hours depending on the amount of snow. 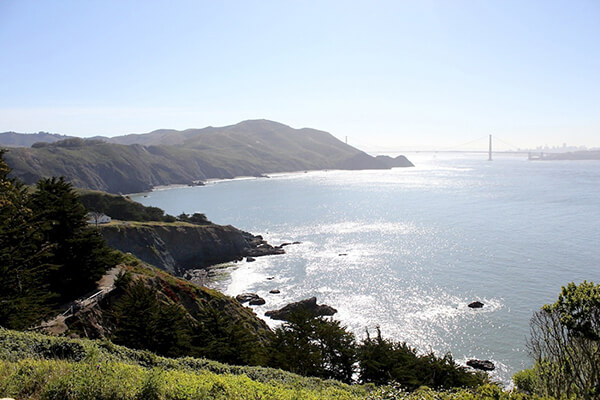 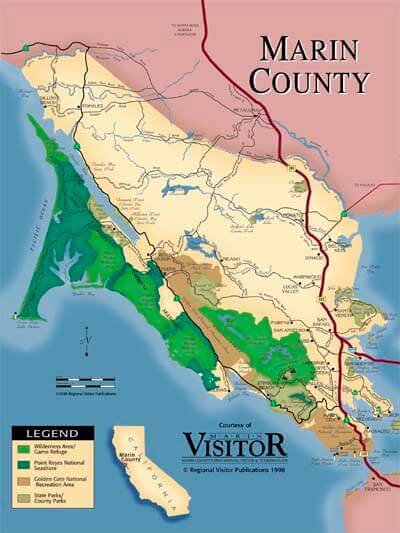